The foundation of any good movie or screenplay is having a very good plot structure. As human beings, we need our skeletons to stand erect; so also do stories, but instead of calling it a skeleton, we call it plot structure.

No one would want to watch a movie or read a screenplay that has everything (good or bad) going to the extreme. Having a good plot structure helps you know when to draw the line.

A screenplay with a good plot structure takes the reader on a steady, high, downward, and back to the steady journey.

Plot: The sequence of events used to tell a story.

The diagram below is from Brittanyekrueger. Click/Tap on the image for a clear view. 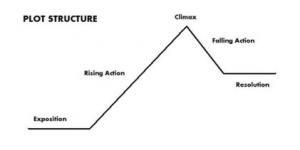 Exposition (The Setup): This is where you equip your reader with the information they’ll need to understand your screenplay going forward.

Plot point 1: The screenwriter becomes RUTHLESS to the protagonist.

Rising Action: Nothing fantastic happens here to the protagonist as every event that occurs makes him/her want to quit life.

Plot point 2: This is where the screenwriter makes something miraculous happen.

Resolution: The point where the screenwriter ties up the loose ends he/she created.

No matter how creative you want to get with your plot structure, make sure these five elements are well represented.

Read: How To Write A Movie Synopsis.

The Setup: Richard is a wealthy man who loves to help people no matter their financial challenges.

Plot point 1: Richard gives one of his Uncles (jealous Uncle) money as his jealous uncle takes his money to a native doctor to make him poor.

Rising Action: Richard becomes a beggar and the people he helped while he was wealthy turn their back on him. His children are sent out of school, no money to eat, no money to pay hospital bills as one of his child dies, and his beloved wife becomes a problem.

Climax: Richard decides to vulcanize on a major road.

Falling Action: Richard still has all the problems, but at least, he has little money to buy sachet water, bread, and groundnut which he couldn’t buy before.

That’s how the plot structure works, but did you know that you can start writing your screenplay from any part of the pyramid? BREAK THE RULES ONLY WHEN YOU UNDERSTAND THE RULES!