For you to be reading this post, it means you’re alive, and the life you’re living right now has elements (water, air, fire, earth) which simply means that without one of life’s elements, the opposite should be the case.

A story is broken down into scenes in a screenplay which simply means that we move from one scene to the next until the storytelling is complete.

How do I know a scene in a screenplay?

You’ll know a scene through the scene heading.

A scene heading or a slug line “majorly” tells everyone involved in the movie production three things and it’s the first thing that begins a scene. These three things are:

This is the second element of a screenplay, and as the name goes, the only thing that happens here is the description. These descriptions are:

For more details on scene headings, read: How To Write Action Description.

A character is an imaginary person in a story. When a character’s name first appears in the action description, it should appear in capital letters (RICHARD); afterwards, it can appear in normal letters (Richard).

The character’s name is written beneath the action description; not on the left margin, but written close to the centre of the page.

This is an instruction from the screenwriter given to the actor who is taking up the role of the character, and this instruction appears in parenthesis or bracket beneath the character name. For example: (upset), (beat), (sarcastically), etc.

Screenwriting is visual storytelling; this means that whilst writing, you as the screenwriter should be able to see how events would unfold on screen using your mind-eye.

These transitions are written on the right side of the page with a colon at the end. For example: CUT TO: , BACK TO: , DISSOLVE TO: ,

Let’s see the elements of a screenplay in a practical form. The screenplay image below was gotten from Screencraft.

Click/Tap on the image for a clear view. 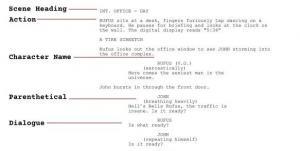 Even though the “popular” six screenplay elements have just been shown practically, there’s another element called EXTENSION.

Extensions are written on the right-hand side of the character name and they are enclosed in a bracket. There can be as many extensions as possible, but the most common extensions are:

The screenplay image below was gotten from Writers Store.

Click/Tap on the image for a clear view.

For more details on these extensions, read: Screenwriting Terminologies.